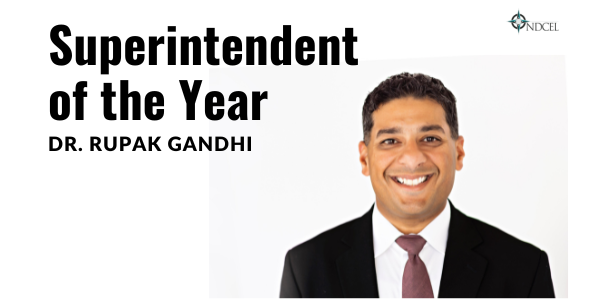 Dr. Rupak Gandhi, Fargo Public Schools, has been named the North Dakota Superintendent of the Year by the North Dakota Association of School Administrators (NDASA), as part of the First Student, AIG Retirement and AASA —American Association of School Administrators (AASA) Superintendent of the Year Program. This program pays tribute to the talent and vision of the men and women who lead the nation’s public schools.

A California native, Dr. Rupak Gandhi completed his undergraduate studies in Political Science at Texas A&M University. He holds a master’s degree in special education from Grand Canyon University in Phoenix, AZ, and holds his doctorate in educational leadership from Northwest Nazarene University in Nampa, Idaho. Dr. Gandhi began his career in education in the Houston Independent School District. After serving as a Special Education resource teacher through Teach For America, he served as a high school assistant principal, an elementary principal for a campus of 750 students, and lastly, the principal of a comprehensive 6A high school serving nearly 3,000 students. Prior to his current role, Dr. Gandhi served as the Research, Data, and Accountability Officer (Assistant Superintendent) for Harrison School District Two in Colorado Springs, CO where he provided leadership and strategic direction for accountability planning, implementation of performance measurements, and reporting of practices for the district.

In March 2018, the Board of Education of the City of Fargo hired Dr. Gandhi as the Superintendent of Schools. He officially assumed the position in July 2018. Dr. Gandhi and his family currently reside in Fargo.  Quickly earning the respect of his peers and other leaders in the state, he also serves on the national governing board for AASA, as well as on the NDCEL/NDASA Legislative Focus Group, and NDASA Board.

Dr. Rupak Gandhi is the proud husband of Dr. Britney Gandhi and father of Jagger (5), Emersen (2), and Tex (Goldendoodle).

The ND Association of School Administrators and the North Dakota Council of Educational Leaders congratulates Rupak on this well-deserved achievement.